One of the reasons Michael Williams co-authored the best-selling Black Scientists & Inventors series of books was the apparent lack of representation of the contributions made to science and inventions by non-European people in school science books.

Although the series has been received extremely well both in the UK and internationally the representation of UK Black Scientists & Inventors in the titles could be improved.

With that in mind earlier on in the year he decided along with the BIS Publications’ team to research the contributions being made by UK based Black Scientists & Inventors. We have teamed up with The Power Of Definition™ and Black Scientists & Inventors™ to find these inventors and scientists and to publish our findings in a new title we aim to release later this year. We thought March would be a great time to announce our intentions to the public and it would be quite fitting since the UK's International Science Week –15thto 22nd March 2013 falls in that week.

We therefore decided to have an event on Friday 22nd March 2013 celebrating UK Black Scientists & Inventors and symposium all at the top of their profession. As we were pressed for time the window for promotion for the event was narrow and so leading up to the event the registration was low by the BIS Publications standards but then on the evening we were pleasantly surprised with the full to the brim house, I guess It was a case of serendipity.

I must mention that in the past we have hosted these types of events in central London locations such as the Science Museum, TUC and in London universities. But on this occasion we decided to have the event in the inner city deprived area of Tottenham. A town that has become internationally famous for two reasons the football club Tottenham Hotspurs and the 1980s and 2011 up risings. One of our aims were for young people in the area to see and hear from people just like them who have achieved amazing things outside of sport and entertainment.

That said the event was opened by Michael Williams co-author of the best-selling Black Scientists & Inventors series who helped to set the scene. 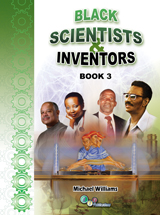 Williams presented a audio visual animation of the Hon. Marcus Garvey speaking on science. The quote by Marcus Garvey was “...in your homes and everywhere possible you must teach the higher development of science to your children; and be sure to develop a race of scientists par excellence...”

This audio visual piece both capture the attention of the adults and children.
Now that we had everyone’s attention after the audio visual piece, Mr. Williams who was also the facilitator for the evening introduced Dr. Donald Palmer a senior lecturer at Imperial and London School of `Veterinary and a specialist in immunology. Dr. Palmer spoke about science in general, his own background and also how black children can get into a science career. 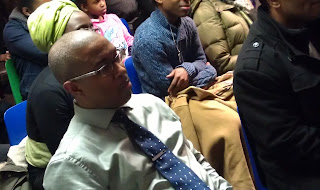 Then another audio visual piece of Leroy Brown the inventor of the electronic car jack was presented, at this stage the audience were amazed they had no idea that someone like that existed in the UK.

Prior to the event we received many emails suggesting although the Black Scientists & Inventors in the UK is a great endeavour, but where were the sisters! So I was extremely pleased when Mr Williams introduced the next guest speaker who was Dr. Eyman Osman. This young African woman has achieved a very high standard in her chosen field mainly genetics with a view to making an impact not only her country of origin- Sudan but to the rest of the world in diaspora. She is also involved in furthering her community’s development in education and has set up a social enterprise in her name Iman – Faith. Dr Osman was well received. 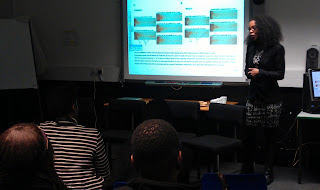 Next was Dr. Mark Richards of Imperial College, but he had been running late. We were fortunate that our team always plans for the unexpected and so our back up was a video piece of him talking about an invention that he was working on at Imperial, again this video went down very well with the audience.

The final person was Sam Amalemba author of Becoming, youth leader and mentor to many young people in Tottenham. As co-author of the new title Black Scientists & Inventors in the UK Mr. Amalemba went on to introduce several more UK based black scientists and inventors to the audience via a PowerPoint presentation. It was very interactive and again engaged both young and old. 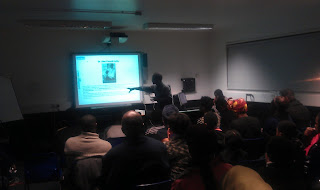 Sam Amalemba delivers a very interactive presentation for the children.


Time was moving on and we just had a little time left for questions and answers. All the speakers were asked to come to the front, by this time Dr. Richards had arrived and was asked to join the panel. As he was not able to present earlier, Mr. Williams allowed him to open the questions and answers session. Dr. Richards started by once again using the Marcus Garvey quote Mr Williams opened the event with, he then asked the audience what were their thoughts on that quote.

All in all It was an amazing evening and all who attended gave us fantastic and positive feedback. I would like to say thanks you to Michael Williams for this great idea, all the speakers and most of all the audience who attended.

Posted by BIS Publications at 06:25

Email ThisBlogThis!Share to TwitterShare to FacebookShare to Pinterest
Labels: Black Scientists and Inventors In the UK March 22nd 2013 Event