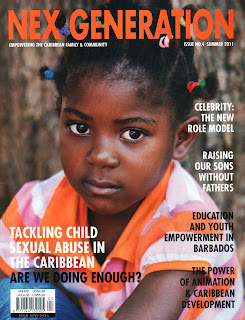 I thought I would just let everyone know that the summer edition of the NEX Generation magazine is still out. For those of you who are not aware of the magazine, let me just give
you a quick history of its development.

Nex Generation magazine was first conceived by Dekenu Shepherd and his wife Pamela Lorde in 2003, whilst they were publishing Afrikan Business & Culture/ABAC magazine (formerly Black Business & Culture, launched in 2006). ABAC had one name change, which was to RISE. They published one edition, but due to the poor response they decided to cease publishing ABAC/RISE in December 2003.

In his own words Dekenu shares “While observing the social and economic demise of the African Caribbean community in the UK, the decision to relocate to Jamaica in March 2007, was taken after Pam and I explored the options of raising our two young children in Jamaica/Caribbean in 2006”.

Nex Generation now focuses on addressing critical issues affecting the Caribbean family development. For the first time the UK & USA, now have access to the Caribbean's first socially conscious magazine geared to empowering our families at home and abroad.

So that was my quick break down of its history and I must say I a pleased with Dekenu's and Pam's steadfastness and determination to continue producing the magazine in my humble opinion the UK black community still need his magazine and talent more than ever especially after what we witness over the last few weeks. In the next few weeks I will publish an interview with the editor Dekenu so he can give you the full inside story.

There are some great articles in this addition, It opens with one written by myself entitled Inspiring Our Young People Beyond Sports and Entertainment. It has other great pieces throughout such as one entitled Creating A Positive Home Learning Environment by David Simon. I recommend that you pick up a copy, unfortunately there is only a limited supply in the UK but you can pick up a copy from BIS Publications for £4.50 plus P&P. - do hurry just 10 left.

We are also looking for distributors for the magazine up and down the UK, if interested do contact me: 07903 791 469.

Posted by BIS Publications at 03:59