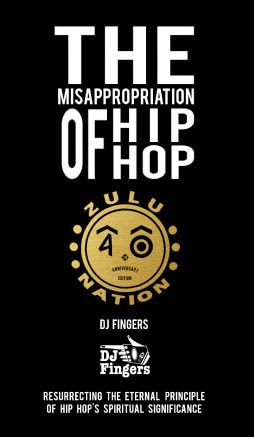 
DJ Fingers has captured the very essence of the meaning of Hip- Hop in this long awaited but extremely refreshing book. For too long we have been force fed a mongrelisation of what the record industry wants the youth to believe is Hip Hop (and for lack of a better word “Rap”), which in turn has our young men thinking that it’s cool to be a Pimp or a Drug dealer and our young women thinking they should portray themselves as Hoes. What Fingers has done is to take it right back to the big bang of the emergence of this truly great culture and has dared to expose the corporate media as the chief instigators of turning a pure art form into a hybrid of its’ former self.

I asked Fingers why a book on THE MISAPPROPRIATION OF HIP HOP and what do you mean?

Fingers response was, “in the book I will give examples of the meaning of the misappropriation of Hip-Hop by considering these five pivotal questions:

1. Were the political and social conditions of black and Latino youths in the South Bronx a major factor in the formation of Hip-Hop?

2. What are the consequences of the dominant negative black/Latino image on the consumers of Hip-Hop?

3. What was the original intent of Hip-Hop Culture at its formation?

4. What is the significance of ‘Knowledge of Self’ in relation to Hip-Hop?


5. Have advancements in technology decided the shape of Hip-Hop? If so, should we regard this as a positive evolution? “
Posted by BIS Publications at 05:54

Email ThisBlogThis!Share to TwitterShare to FacebookShare to Pinterest
Labels: “The Misappropriation of Hip Hop ”By DJ Fingers, Legendary UK DJ/Producer and Zulu King.