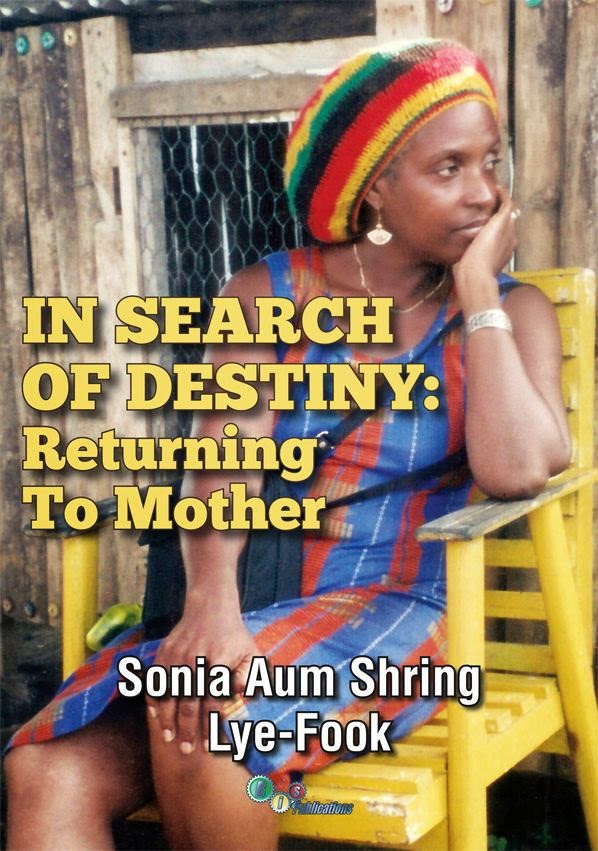 I’m a little late in making this post, but I guess better late than never. Anyway I've been meaning for a few weeks to make this posting but I have been tied up on a book that I'm currently working on, more about that at a later date. It's very pleasing to me when an author who I've been working with to self publish their book, realizes that goal, and even better when I have managed to help several all at the same time. Okay let me start at the beginning.


About 2 years ago, at one of the BISPublications' 1-Day Intensive Course For African / African CaribbeanAuthors who want to Self-Publish Successfully, Sonia Lye-Fook attended the course. As usual we had a good turn out with plenty of eager wanna-be self-publishing authors. I said that it's great that you are all here but please note that this is just the start of your self-publishing journey and unfortunately in this room only 2% of you will follow this through to completion. Why did I say
that?
Simply because I know that to be a self-published author it takes commitment, one has to be Focused and requires Concentration for long periods, on the task at hand; One needs to be determined, a starter and a go-getter, one needs to challenge their own lack of self-belief and procrastination, daily.
That said, when we had the first break Sonia came up to me and express how she was enjoying the course and how it was inspirational, but then she hit me with “but I have to leave at lunch time!“. This meant that she would miss the second part of the course. It made me think for a while - would Sonia be a part of the 98% that would not follow this process through to completion. Anyway during that break Sonia gave me an Anthology which included several stories by authors of African descent who chose to emigrate to Ghana mainly from the UK and the USA. One of the entries was Sonia's story and it was at that stage I realized that she permanently lives in Ghana and in fact was en-route to Ghana that very day. But due to her desire to get her story published, she wanted to get to the course to gain just enough tools to empower her in that process. Well to cut a long story short, after that course we worked with Sonia for two years till we finally helped her self-publish the book this year. The book is entitled: IN SEARCH OF DESTINY: Returning To Mother .

In the month of July we heard that Sonia was coming to the UK with her husband Byron for their daughter Samia's graduation. I said to my colleagues great she'll be here and her book will also be published this month let's have a book launch whilst she is here. I'll come back to that later - but first let me tell you about another author.

Alan Sharp first came to our 2-Day Master Class Self-Publishing TasterCourses, in January 2013. Along with several others on that course, he subsequently attended the main 2- Day Master Class which was in February 2013. After the master class, Alan contacted us and said that he had been developing a book for the last several years and he believed that the 1-2-1 coaching session that we offer after our courses, would be beneficial to him. Well Alan did attend the coaching sessions and like Sonia we worked with him throughout the year until we were able first to help him self-publish his book which is titled CHANGING GENERATIONS: CHALLENGING POWER & OPPRESSION IN BRITAIN TODAY in E-book form for Amazon Kindle in February 2014, then for Kobo, GooglePlay and Nook. We finally had his printed edition ready for July 2014, with that in mind we thought it would be a great idea to have a joint book launch. On the 25th July 2014 both Sonia and Alan’s’ books were launched to a packed audience at the Conway Hall in Holborn, London. Despite the buckets of rain that fell earlier on the day, many people turned up to hear the stories of this two authors; perhaps the rain was a blessing and was just cleansing the way for these new beginnings.

When we at BIS first chose to work with both these authors, it was because we felt they had a valid and important story to tell. Sonia's book IN SEARCH OF DESTINY: Returning To Mother is a biography which is full of important recent historical information that young people in the UK, in particular and the world in general need to know about people who migrated to the UK from the Caribbean during the 50s and 60s. Alan's book - CHANGING GENERATIONS: CHALLENGING POWER & OPPRESSION IN BRITAIN TODAY, is a scholarly piece of work from a white man’s point of view, on how white men use white privilege and a system of white supremacy to hold back African, Asian and other people of colour as well as women and even some working class white men. He's book is a challenge to white men to identify how they are oppressing other people both knowingly and unwittingly so. Alan has placed solutions in the book for white men to overcome their racial attitudes towards people of colour and women. It's the type of book that some black authors have written but would not be read by most white men, as they would think that the author just has a chip on his shoulder. That said, Alan is ready to take on huge criticism from white men and even some black ones too, who feel that we are now living in a post-racial world since the election of president Obama. Unfortunately, that cannot be more further from the truth, as evidenced by the killing of Mark Duggen; the spying on the Laurence family by the police, while seeking justice for the brutal murder of their son by a racist gang, in south east London, nearly two decades ago and finally the spate of recent killings in the USA of black boys by both white security guards and police offers.

IN SEARCH OF DESTINY: Returning To Mother and CHANGING GENERATIONS: CHALLENGING POWER & OPPRESSION IN BRITAIN TODAY is a book that has come right on time.

To get copies of both,
CHANGING GENERATIONS: CHALLENGING POWER & OPPRESSION IN BRITAIN TODAY
by Alan Sharp
and
IN SEARCH OF DESTINY: Returning To Mother
by Sonia Lye-Fook


Listen to Sonia on Colourful Radio:

Posted by BIS Publications at 07:33