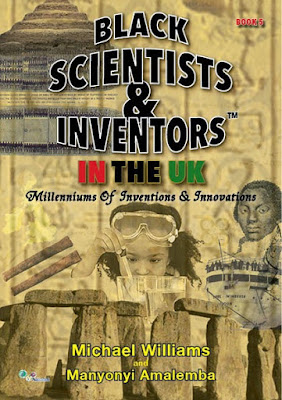 Over 10 years of research and 2 years, 8 months to write the book, Amalemba and Williams produce one of the most monumental books on the African contributions to the UK in science, inventions and technology.

In this ground-breaking book, a best-kept-secret is made known, they dare to suggest that people of African origin were at least amongst the first inhabitants of Briton and brought with them from Africa their science, technology and language etc. Amalemba and Williams also demonstrate that throughout the middle ages up to present times people of African descent (residing in the UK) continue to contribute in all areas of science, technology, engineering and maths (STEM).


Learn about the black:

In this new book the authors don’t hold back on the information they have found, they shine a bright light on recently hidden knowledge. After reading this book you will never look at science in the say way again, 380 pages of pure knowledge.

The Book Launch
"Black Scientists & Inventors In The UK: Millenniums of Inventions & Innovations [Book 5] " is an ideal book for older children and adults.  Join BIS Publications and special guests black scientists & inventors at City Hall, London, on 26th November 2014 for the presentation and launch of this ground-breaking book.  Please note that there are just a limited number of spaces left and a limited number of books available. Make sure you secure your copy by pre-ordering today. £14.99 before 25th November, Then after: £18.99.

To register and purchase this ground-breaking book Click Here!

“There is no Force like Success, and that is why the individual [Successful person] makes all efforts to surround himself throughout life with the evidence of it; as of the individual, so should it be of the nation.”- The Most Honorable Marcus Garvey
Contact: info@bispublications.com

Posted by BIS Publications at 05:46